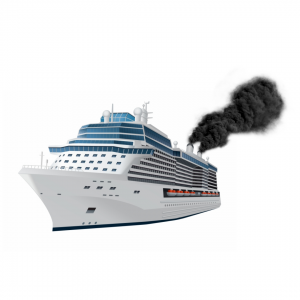 The daily emissions of a cruise ship can be the same as a million cars!

The air quality on the deck is as bad as the world’s worse polluted cities.

Cruise ships typically use heavy fuel oil in their engines. It has very high sulfur content but is more cost-effective than other fuels.

Unfortunately this heavy fuel oil produces high levels of nitrogen oxide, which has been linked to acid rain, higher rates of cancer and other forms of respiratory diseases.

On top of the pollution caused by their fumes, cruise ships have been caught discarding trash, fuel, and sewage directly into the ocean.

Some European cities like Marseille or Dubrovnik are having difficulties to cope with the rapid increase of travelers visiting by cruise, resulting in maritime pollution.

Overall, the carbon footprint per person in a cruise ship can be up to 3 times higher than in a plane!

Source: The Telegraph, The Guardian, Forbes

Find hundreds of easy eco tips and learn how to be more eco friendly, go zero waste, reduce your carbon footprint and many other ways to help the planet. Find also news, facts, information and quotes to learn more about topics like climate change, global warming, plastic pollution, energy savings, recycling, and many more! We think raising awareness is the first step towards a greener world, so help us share this!
We use cookies to ensure that we give you the best experience on our website. Click below to accept.OkPrivacy policy