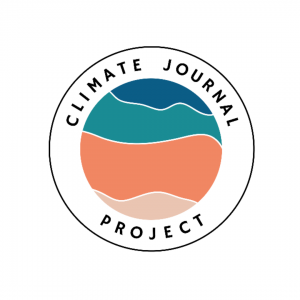 Our story began in the big apple— or New York City. Yvonne, the founder of the Climate Journal Project and at the time a very tired but very motivated grad student at New York University was in the works of something– at the time this something was simply a thesis project but now, almost two years later, it has turned into a mission, a path and a key for many. But before I get too ahead of myself, let me backtrack and take you on this wild journey that led to this very monumental moment–the launch of our very first journal book.

Yvonne Cuaresma had always been very ambitious. Born in Saudia Arabia to Philipinno parents and raised in California she made her way to New York City to pursue her passions– Food and Sustainability. There she would spend years learning about the history of food, the complex identities associated with food and the environmental consequences of our current food system to eventually earn her master’s degree in Food Studies. W/purpose, now known as The Climate Journal Project, was the initial product of years of hard work but the journey officially began when Yvonne’s enthusiastic personality decided to take everything a step further. She decided to transition her thesis project to an official startup by entering the 300K competition– a competition designed to support startups with the reward being a large fund to aid in growing the company.

As you can imagine this competition was anything but short of challenges and rivalry but as a team we were united through everything, including a pandemic (but let’s not get ahead of ourselves). W/purpose at the time was an online platform aimed to help New Yorker’s find sustainable food around them. While there are currently many food platforms such as UberEats and Grubhub, none of them are specialized in sustainability. Obviously the information can be found somewhere online but there is simply too much and most of it is simply not reliable– so we realized this needed to change and as a team we took it upon ourselves to make it happen. 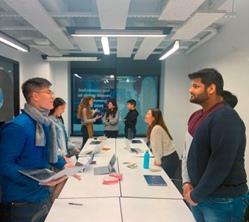 About a year ago, we were the picture of a startup company. Sleepless nights. Countless group discussions. Numerous meetings across town. Constant back and forth. Reading and learning and always improvising. It was crazy but the startup world is crazy– and if any of you wish to start a business of your own, do it but do it knowing that it will take 110% of time, sweat and tears.

Being flexible and able to improvise is the most important quality needed to make it through the startup world. If the last year has taught me anything is that anything can happen, we really can’t control anything and we must be ready for such roadbumps. So while we were running around New York City interviewing beautiful restaurants such as Seamore’s and Hearth and growing as a team and company, we ran into Ms. Rona. Yes, out of nowhere a literal pandemic took over our lives and the world. Most startups run into problems such as low funds and arguments, problems we were already dealing with but now we also had to consider a worldwide, deadly pandemic.

When the world shut down in March, it seemed as though W/purpose was also shutting down. As I said goodbye to New York City to move back in with my parents, it felt as though I was saying bye to my team, a team that had become my family over the last months. Obviously I was wrong. As soon as I landed in Switzerland I got tons of messages from my teammates (including a lot of work) and a schedule of our next meetings. We continued working together, trying to keep any sort of normalcy while still being aware of the reality that was happening outside our doors. 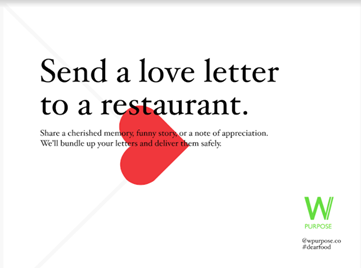 Initially we focused on restaurants in New York City– we knew many of them were losing business and it was vital for us to offer our support. We launched a campaign where our audience was encouraged to write love letters, letters of encouragement and hope to said restaurants. It was beautiful and very much appreciated but the economy was bad and the only thing these restaurants really needed was money and we didn’t have money. We wanted to help so bad but didn’t know how to. Our world was falling apart and the team slowly began to fall apart. We were losing hope.

It was very hard to look outside and see the world in misery. Not only was a deadly virus roaming around the streets killing the population but our planet was still suffering and slowly dying from our actions. A lot was happening outside but also in our minds so Yvonne, an avid journaler, encouraged us, as a team, to start journaling. A journaling prompt was presented during every weekly meeting and we were encouraged to write everything we were feeling and share with the team. It helped. It really helped. Not only did it help me process my own feelings but doing it as a team and hearing what others had to say really helped me not feel alone. I not only felt heard but I felt supported and safe. It seems quite stupid to give journaling, writting your thoughts, so much credits but it worked, so much so that we began encouraging our friends and families to join us.

It became our little thing. Journaling, sharing and discussing. At first we found a prompt online but quickly started writing our own. Seeing the benefits it had on us and our friends was incredible but we wanted our entire community to benefit from this. We wanted them to know that we too were experiencing anxiety and grief, over the pandemic but also the state of our planet, and that journaling could be a tool for them too. So that’s exactly what we did. We gathered our closest friends in the environmental field and asked them to each write a prompt for us. This resulted in 14 (ended up being 18) journaling prompts centered around environmental grief and climate anxiety written by incredibly knowledgeable and motivated individuals in the field. These 14 days of journaling were followed by an event that allowed participants to form a community and meet the prompt contributors. 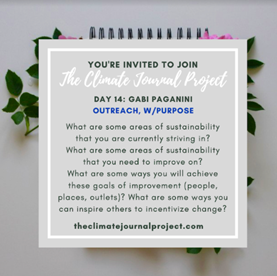 It was a hit. People loved the prompts and truly found comfort in journaling. And that takes us to today. What started as a coping mechanism for our team has now turned into The Climate Journal Project. Since starting journaling in the summer we have hosted multiple events, started a blog and a podcast and most excitingly have finalized our first event Climate Journal Book. This book contains 52 guided prompts and aims to help our generation process and conquer environmental anxiety. This is our baby and we’re so excited to share it with others. 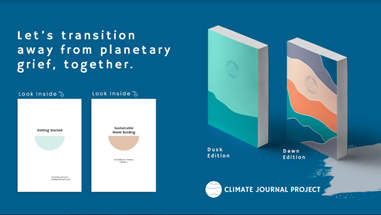 What started in the engineer’s lab at NYU has now turned into a stable, growing organization. We have gone through a lot of hurdles but this is only the beginning. We are now overcoming our next challenge– funding. Our current mission is to raise sufficient funds to be able to produce and distribute the books. Yes, I will say this once again, starting your own company is hard, but so damn worth it!

We would really appreciate your support on our Kickstarter and your help sharing our work!

Gabi Paganini is Partnership Lead at The Climate Journal Project

Environmental grief and climate is becoming more and more familiar to environmental activists and enthusiasts. The Climate Journal Project  addresses the intersection between wellness and environmentalism — helping people become closer to the planet through a climate focused journal practice. Their goal is to create a space where you, too, can cope with your eco-anxieties in order to move past paralysis to action. Follow their journey on Instagram