If you’re up to date with environmental news, you must know about the worldwide anti-plastic movement. Due to issues surrounding this material, people everywhere are going to great lengths to live a plastic-free life. But plastics are not intrinsically bad. They can also have positive ecological impacts. Which brings us to the question, is plastic the issue, or is it our single-use mindset?

Paradoxically, plastic was born to prevent animals from dying
Plastic was invented due to the growth in the popularity of billiards. The balls were made out of ivory tusks, which meant elephants were being slaughtered by the thousands. Realizing the unsustainability nature of this product and the increase in price due to the scarcity; not to mention the negative impact it was having on elephants, a cheaper alternative was sought. And that’s where it all began.

A study conducted by Trucost found that the “environmental cost of plastic in consumer goods is 3.8 times less than the alternatives materials that would be needed to replace plastic.” For materials such as glass, aluminum, and paper to replace plastic in the same functions, the environmental cost would increase from “$139 billion to a total of $533 billion” a year. The cost would not be the only factor to increase but also the energy, water, and solid waste consumption, along with a rise in greenhouse gas emissions.

So plastic should be saving the world, but right now it’s choking it and intoxicating us. What’s going on?
We humans have gone crazy because we produce and consume without restraint. According to the Helen McArthur Foundation, plastic production has increased 20-fold in the last 50 years to reach 380 million tons by 2015. Yet less than 10% is recycled. So, we cannot blame a material, when in fact it is our mentality that is responsible for the pollution.

Being aware of the origin of the problem, how can we start to mitigate it? The answer is simple: WE consumers have the power to change it by doing three things: 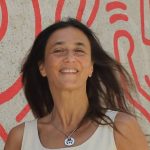 María José is a biologist, advertiser who has dedicated her life to undertaking projects with a social impact, as well as collaborating with environmental organizations focused on conservation and corporate social responsibility. María José is the co-founder of the startup POPSICASE, which manufactures mobile phone cases from fishing nets, which can also be recovered to make new ones, a process of circular economy never seen before.