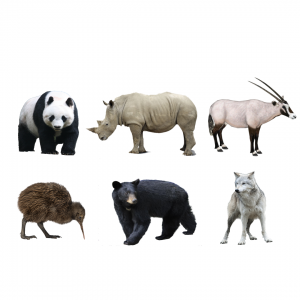 These animals are no longer endangered, they have made a comeback from the Endangered Species list:

1️⃣ Southern White Rhino: around 20k southern white rhino now live in protected areas in South Africa, Namibia, Kenya and Zimbabwe. It is the only rhino specie (out of 5) that is not endangered anymore.

2️⃣ Giant Panda: in 2016 the Giant Panda was officially downgraded from ‘endangered’ to ‘vulnerable’. Around 2,000 Giant Pandas now live wild in protected reserves across China.

3️⃣ Arabian Oryx: in the early 1970’s, the ‘Arabian Unicorn’ was thought extinct, due to poachers. After breeding the few remaining animals in captivity, the oryx was released in the wild in 1982. It is now considered vulnerable.

4️⃣ Grey Wolves: they were added to the endangered list in the 1970’s. Today it’s estimated that more than 5,600 Gray Wolves live wild in the US.

5️⃣ Northern Brown Kiwi: the New Zealand bird was critically endangered until 2017. It is now steadily growing at a rate of 2% per year thanks to conservation efforts.

6️⃣ Louisiana Black Bear: it was declared endangered in 1992 through loss of habitat to agricultural development. In the past 17 years, 700,000 acres of habitats were restored in an effort to save them. The bears were delisted in 2016, and today between 500 – 750 exist in the wild.

Endangered species are at very high risk of extinction in the wild. They may be at risk due to habitat loss, poaching or invasive species.

Famous endangered animals include the Asian Elephant, the Blue Whale, the Chimpanzee, or the Tiger.

For more ideas on how to be more eco-friendly, visit our profile and find hundreds of easy eco tips @easyecotips 🌿